There have been a lot of developments in the last years in machine learning. One of the main developments of course has been deep learning, but now also generative adversarial networks are becoming more and more interesting.

In some of my presentations I have been using the following graph to model and explain the most common machine learning algorithms. There are many more variations, but if you are new to this field it may help you get a good overview of machine learning.

Feel free to re-use the image if you credit me as source.

Our paper Computational Controversy has been accepted at the SocInfo 2017 conference!

Abstract
Climate change, vaccination, abortion, Trump: Many topics are surrounded by fierce controversies. The nature of such heated debates and their elements have been studied extensively in the social science literature. More recently, various computational approaches to controversy analysis have appeared, using new data sources such as Wikipedia, which help us now better understand these phenomena. However, compared to what social sciences have discovered about such debates, the existing computational approaches mostly focus on just a few of the many important aspects around the concept of controversies. In order to link the two strands, we provide and evaluate here a controversy model that is both, rooted in the findings of the social science literature and at the same time strongly linked to computational methods. We show how this model can lead to computational controversy analytics that have full coverage over all the crucial aspects that make up a controversy.

The poster related to the paper

Reference to our paper 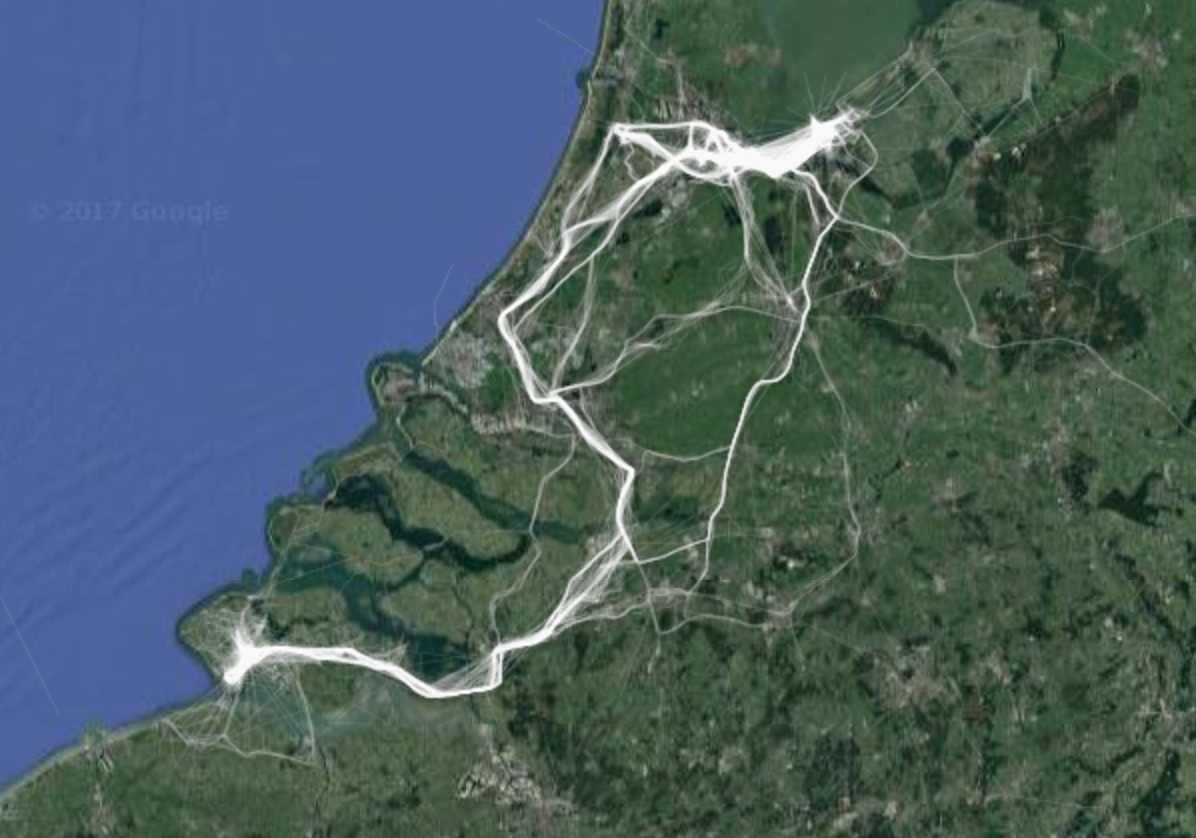 In order to visualize your own location history, download the code repository on github and follow these steps:

I published an update to our dataset of crowdsourced annotations on controversy aspects, as part of the ControCurator project.

We evaluated the controversy aspects through a crowdsourcing experiment using the CrowdFlower platform. The collected annotations from this experiment were evaluated using the CrowdTruth methodology for measuring the quality of the annotations, the annotators, and the annotated articles. The relevance of each of the aspects was collected by asking the annotators whether they applied to the main topic of a given newspaper article. For this, we used a collection of 5 048 The Guardian articles that were retrieved through the Guardian news API. In order to save cost and focus on the main topic of an article only the first two paragraphs of each article were used. In an initial pilot we used 100 articles to test the use of a five point likert-scale answers versus “yes/no/I don’t know” type answers, and additionally whether showing five comments would help annotators identify whether the topic in an article is controversial. In a second pilot we evaluated with the same dataset whether rephrasing of the aspects and adding the time-persistence would make the identification more clear.

The results of the first pilot showed that for both settings when showing the article comments the number of annotators that select “I don’t know” option is significantly smaller (p-value = 0.003). Additionally, we found that the “yes/no/I don’t know” setup always finished faster. Although this difference is not significant (p-value = 0.0519), it may indicate that annotators were more willing to perform this task. Based on this we conclude that the variant with comments and yes-no answers gave the best performance in terms of speed and annotation quality. The results of the second pilot showed the rephrasing of the questions improved the identification as the number of people that selected the “I don’t know” option dropped from 15% to 3% with p=0.0001.

In the main experiment 5048 articles were annotated by 1 659 annotators resulting in 31 888 annotations. The evaluation of the controversy aspects was a two-fold: first the Pearson correlation coefficients were measured in order to identify how strong an aspect correlated with controversy in each judgment. Second, linear regression was applied to learn the regression coefficient between all of the aspects combined and the controversy score for a judgment. This value indicates the weight of an aspect with respect to the other aspects. The emotion aspect of an article was found to be the strongest indicator for controversy using both measures, while the multitude of actors was the weakest. The openness was said to be present most in 70.9% of the annotations, was annotated with a majority in 73% of the articles, and was found to be the most clearly represented aspect.

This dataset is built and used for the following papers. Please cite them if you decide to use our work.

On June 15-16 the Collective Intelligence conference took place at New York University. The CrowdTruth team was present with Lora Aroyo, Chris Welty and Benjamin Timmermans. Together with Anca Dumitrache and Oana Inel we published a total of six papers at the conference.

The first keynote was presented by Geoff Mulgan, CEO of NESTA. He set the context of the conference by stating that there is a problem with technological development, namely that it only takes knowledge out of society and does not put it back in. Also, he made it clear that many of the tools we see today like Google Maps are actually nothing more than companies that were bought and merged together. This combination of things is what creates the power. He also defined what the biggest trends are in collective intelligence: the observation e.g. citizen generated data on floods, predictive models e.g. fighting fires with data, memory e.g. what works centers on crime reduction, and judgement e.g. adaptive learning tool for schools. Though, there are a few issues with collective intelligence: Who pays for all of this? What skills are needed for CI? What are the design principles of CI? What are the centers of expertise? These are all not yet clear. However, what is clear is that there is a new field emerging through combining AI with CI: Intelligence Design. We used to think systems resolve this intelligence, but actually we need to steer and design it.

In a plenary session there was an interesting talk on public innovation by Thomas Kalil. He defined the value of concreteness as things that happen when particular people or organisations take some action in pursuit of a goal. These actions are more likely to affect change if you can articulate who would needs to do what. He said he would like to identify the current barriers to prediction markets and areas where governments could be a user and funder of collective intelligence. This can be achieved through connecting people that are working to solve similar problems locally, e.g. in local education. Then change can be driven realistically, by making clear who needs to do what. Though, it was noted also that people need to be willing and able for change to work.

There were several interesting talks during the parallel sessions. Thomas Malone spoke about using contest webs to address the problem of global climate change. He claims that funding science can be both straightforward and challenging, for instance government policy does not always correctly address the need of a domain issues, and even conflicts of interest may exist. Also, fundamental research can be tough to convince the general public of its use, as it is not sexy. Digital entrepreneurship is furthermore something that is often overlooked. There are hard problems, and there are new ways of solving them. It is essential now to split the problems up into parts, solve each of them with AI, and combine them back together.

Also Mark Whiting presented his work on Daemo, a new crowdsourcing platform that has a self-governing marketplace. He stress the fact that crowdsourcing platforms are notoriously disconnected from user interests. His new platform has a user driven design, in order to get rid of the flaws that exist in for instance Amazon Mechanical Turk.

Daniel Weld from the University of Washington presented his work on argumentation support in crowdsourcing. Their work uses argumentation support in crowd tasks to allow workers to reconsider their answers based on the argumentation of others. They found this to significantly increase the annotation quality of the crowd. He also claimed that humans will always need to stay in the loop of machine intelligence, for instance to define what the crowd should work on. Through this, hybrid human-machine systems are predicted to become very powerful.

Hila Lifshitz-Assaf of NYU Stern School of Business gave an interesting talk on changing innovation processes. The process of innovation has changed from a lane inventor, to labs, to collaborative networks, and now into open innovation platforms. The main issue with this is that the best practices of innovation fail in the new environment. In standard research and development there is a clearly defined and selectively permeable, whereas with open innovation platforms this is not the case. Experts can participate from in and outside the organisation. It is like open innovation: managing undefined and constantly changing knowledge in which anyone can participate. For this to work, you have to change from being a problem solve to a solution seeker. It is a shift from thinking: The lab is my world, to the world is my lab. Still, problem formulation is key as you need to define the problems in ways that cross boundaries. The question always remains, what is really the problem?

In the poster sessions there were several interesting works presented, for instance work on real-time synchronous crowdsourcing using “human swarms” by Louis Rosenberg. Their work allows people to change their answers through the influence of the rest of the swarm of people. Another interesting poster was by Jie Ren of Fordham University, who presented a method for comparing the divergent thinking and creative performance of crowds compared to experts. We ourselves had a total of five posters covering both poster sessions, which were received well by the audience.

Today I presented our work on ControCurator at the Amsterdam Data Science Coffee & Data event on Controversy in Web Data.

The slides that I presented are available here:

On 9th of June we are organising a Coffee & Data event with the Amsterdam Data Science community. The topic is “How to deal with controversy, bias, quality and opinions on the Web” and will be organised in the context of the COMMIT ControCurator project. In this project VU and UvA computer scientists and humanities researchers investigate jointly the computational modeling of controversial issues on the Web, and explore its application within real use cases in existing organisational pipelines, e.g. Crowdynews and Netherlands Institute for Sound and Vision.

The Agenda is as follows:

The event takes place at the Kerkzaal (HG-16A00) on the top floor of the VU Amsterdam main building.

As I am study advisor for the international students, I am also responsible for immigrants that study Computer Science bachelor at the Vrije Universiteit. In order to provide these future students with a clear picture of what they can expect, I gave a presentation about Computer Science, our program at the University, and things they should take into account as (international) students.

The presentation is available below, which is based on slides of Wan Fokkink. If you are an immigrant and would like to study Computer Science at the VU, you should get in touch with VASVU for a preparation year or visit the Computer Science website.

Last week I gave another talk in our Weekly AI meeting on the topic of ControCurator. This is a project that I am currently working on, which has the goal to enable the discovery and understanding of controversial issues and events by combining human-machine active learning workflows.

In this talk I went into the different aspects of controversies, which we have identified in this project. You can view the slides here:

We present our latest work on the CrowdTruth framework, titled “Human Computing for the Real World”, at the ICT Open 2017 conference on 21st and 22nd of March 2017. I made a new video that demonstrates the different aspects of the framework for dealing with ambiguity in data, crowdsourcing of human interpretations, and evaluating disagreement between annotations.